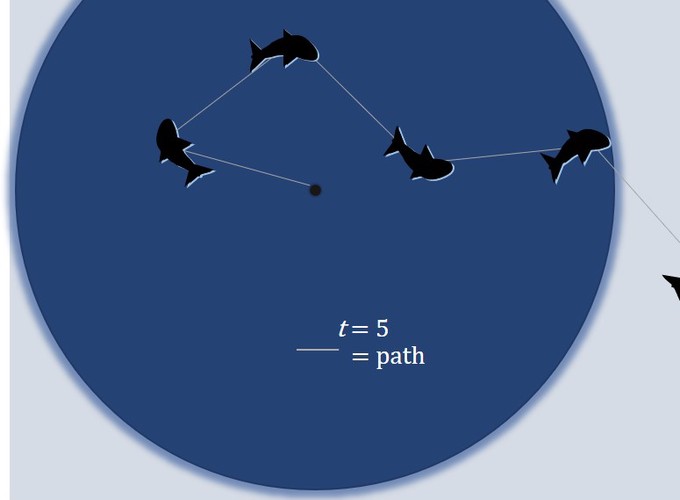 Passive acoustic telemetry is a powerful tool for tracking aquatic animals, yet the data derived from acoustic tags have important limitations. For example, inferences about habitat associations rely on statistical correlations, where frequent observations within a given habitat are interpreted as habitat preference. However, tagging data are not measures of movement per se, or even behavior more generally; rather, tagging data are representations of locations in space and time and can reflect limitations in the sampling technology as much as animal behavior. This interaction between sampling technology and resulting data means it is necessary to have some null expectation in order to evaluate a hypothesis predicting a habitat association. Here, we developed a null model for animal movement based on random walk simulations and examined our ability to distinguish random from intentioned movements when using passive acoustics. By comparing simulations to telemetry observations, we provide guidance for both data interpretation and future study design. We found that (1) real-world telemetry observations cannot be distinguished from random walks during initial portions of sampling and (2) researchers must account for the interaction between study duration and the ratio of organismal step size relative to detection radius when calculating site fidelity. To assist in the interpretation of passive acoustic data, we provide an analytical solution to forecast when real-world observations are reliably distinguishable from simple random walks.

Studying the distribution of organisms and communities